Gambino Vini is the highest vineyard on Mount Etna in Sicily where volcanic activity first took place about 500,000 years ago.

The Phoenicians, and later the Greeks, were the first to cultivate and produce wine throughout the Mediterranean region.

Volcanic ground, which is rich in mineral salts, creates a grape with the perfect balance of sugar, acid and alcohol for the production of wine.

One of the most interesting aspects of growing wine grapes was demonstrated as we toured the vineyard.

The secret of success lies in the degree to which the grapes are exposed to the sun.

The direct exposure to the rising sun from the east in the morning promotes healthy growth whereas the burning afternoon sun from the west demands that the grapes are sheltered by a covering of leaves.

So the pruning of the leaves takes place on the east facing side of the vine.

Seven different wines, using a combination of seven different grapes from Nerello Mascalese to Catarratto are produced at Gambino Vini.

From the stand alone Alicante Rosso wine to the Cantari, Feu d’O and Tifeo varients, which come in both Bianco (White) and Rosso (Red) form, the wines are designed to accompany all food types from fish to spicy meat and vegetables.

We sampled them all alongside the lovingly prepared food.

Locally baked yellow flour bread was the perfect accompaniment for a thick chick pea soup, while the highlight proved to be the pork and freshly picked herb sausages made to a secret family recipe.

Uproarious laughter followed as a raucous group of American diners greeted the shattering of the wine glass as it fell to the stone floor.

We, a rather more sedate English party, looked on in quiet amusement.

The glass had been in the possession of an elderly American lady who clearly found the heady cocktail of ‘Gambino’ wines and spicy Sicilian foods overwhelming. 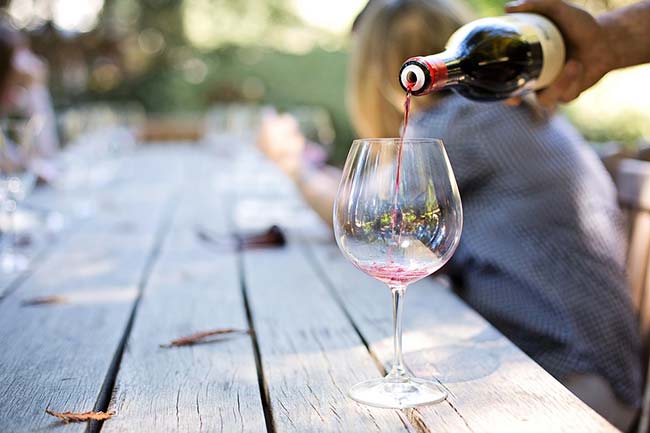 The enthusiasm and passion of our genial ‘Gambino Vini’ host Francesco Raciti contributed to a memorable vineyard experience.

Francesco greeted all his guests as if they were his family and his guided tour of the growing vines and wine production facility was both informative and entertaining.

As a widely travelled man, Francesco was also able to draw on his knowledge of wine growing across the continents of North and South America, Australasia and Europe.

Wine production in Sicily has a chequered history.

In Roman times, the Sicilian wines of Manertinum, Tauromenitanum and Populatum were all celebrated for their quality, as was Marsala in the late 18th century by the British sea admiral Horatio Nelson.

However, by the 1970s, the bulk production of wine by co-operatives, mostly from bland white grapes, shifted the focus from quality to quantity.

In more recent times though, thanks to growers like Francesco, Sicily has regained its reputation for producing quality wines.

The tall, wavy haired Francesco came into his own when regaling us with his intimate knowledge of the seven wines that we’d tasted with each of our luncheon courses.

It is rare that you’ll speak to an Italian without reference to family members.

Francesco was no exception as the vineyard had been created by his grandparents and passed through the generations.

He was particularly proud of his children who were set to continue the legacy. 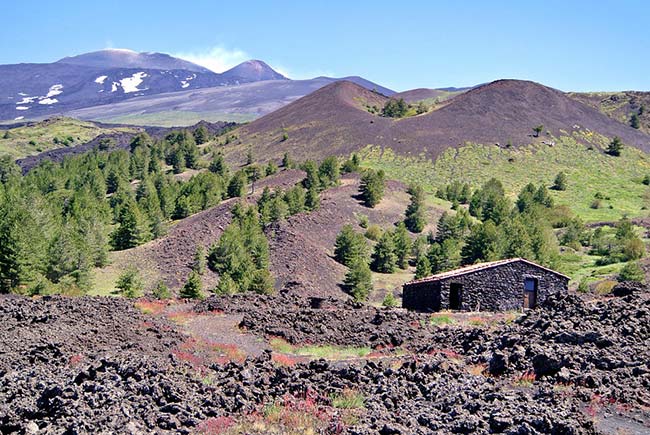 Our tour of Mount Etna, which culminated in the visit to ‘Gambino Vini’, was organised by ‘Wild Wide Sicily’ who specialise in nature excursions.

The morning had been spent viewing the effects of numerous volcanic eruptions.

The 1928 eruption created a  flow that saw the so far, only destruction of an inhabited area, including the train station at Mascali.

All this information was expertly conveyed by our Sicilian guide.

At 3300 metres high Mount Etna is the biggest active volcano in Europe.

In June 2013 it was added to the list of UNESCO World Heritage Sites.

Whilst in a constant state of activity its last major eruption was in the winter of 2008/9.

A more recent eruption on 16 March 2017 injured 10 people, including a BBC News television crew, after magma exploded upon contact with snow.

After plenty of trekking in seasonally hot temperatures we were ready for lunch.

As we rolled out of the vineyard and piled into our 4×4 vehicle one of our party expressed a concern about potential travel sickness as we descended the steep, winding roads.

The driver informed us that paper receptacles were available if the worst happened.

We couldn’t resist enquiring as to which nationality were the worst at holding their drink.

The driver was far too polite to say, offering us the classic diplomatic line, “I couldn’t possibly comment”.

However, we arrived safely at our hotel with none of our wine or sausage going to waste.

Paul Ashton is a UK resident who loves travelling in Italy, usually via the reliable Italian rail network.  He and his wife enjoy regular trips to their holiday apartment in Marina di Caulonia on the southern Ionian coastline of Italy.

We use cookies on our website to give you the most relevant experience by remembering your preferences and repeat visits. By clicking “Accept All”, you consent to the use of ALL the cookies. However, you may visit "Cookie Settings" to provide a controlled consent.
Cookie SettingsAccept All
Manage consent

This website uses cookies to improve your experience while you navigate through the website. Out of these, the cookies that are categorized as necessary are stored on your browser as they are essential for the working of basic functionalities of the website. We also use third-party cookies that help us analyze and understand how you use this website. These cookies will be stored in your browser only with your consent. You also have the option to opt-out of these cookies. But opting out of some of these cookies may affect your browsing experience.
Necessary Always Enabled
Necessary cookies are absolutely essential for the website to function properly. These cookies ensure basic functionalities and security features of the website, anonymously.
Functional
Functional cookies help to perform certain functionalities like sharing the content of the website on social media platforms, collect feedbacks, and other third-party features.
Performance
Performance cookies are used to understand and analyze the key performance indexes of the website which helps in delivering a better user experience for the visitors.
Analytics
Analytical cookies are used to understand how visitors interact with the website. These cookies help provide information on metrics the number of visitors, bounce rate, traffic source, etc.
Advertisement
Advertisement cookies are used to provide visitors with relevant ads and marketing campaigns. These cookies track visitors across websites and collect information to provide customized ads.
Others
Other uncategorized cookies are those that are being analyzed and have not been classified into a category as yet.
SAVE & ACCEPT